First Timers, Urinals, And A Bit Of Wine 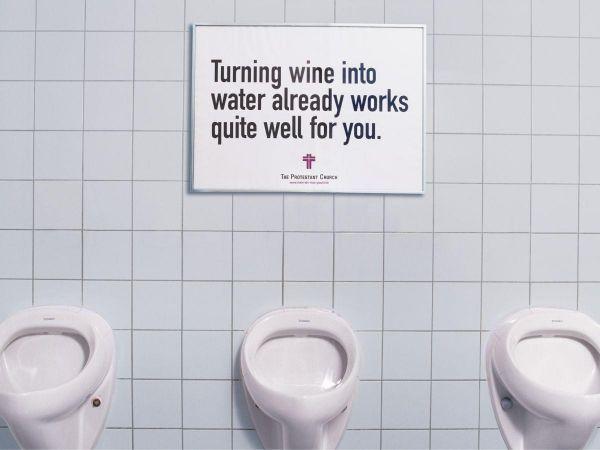 North Point Community Church makes no qualms about it.
They aim their “foyer” environments to the first time church goer.
From changing language used from stage, like saying “singing” instead of “worship”, and having a “concierge service” in the lobby.
And it works.
Peoples lives are changed and Jesus is followed.
I saw it happen every week for 2 years I was on staff.
They do it with a precision a heart surgeon would be envious of.

This morning I attended All Souls Fellowship in Decatur.
If there was such thing as “opposite” Sunday morning target, I walked into it.

Target is such an ugly word.  The target is obviously Jesus.
But you get it.
They used words like “liturgy” and drank wine.  All the kids were in the service during the music and liturgy and my kids were singing every word right next to me.
Trying to get Losiah to shut up while watching Seanna read the liturgy was a thing of beauty.
It was a beautiful mess.

I met a guy at All Souls this morning before the service that had never been to church.
He started talking to me in the bathroom as we were both staring straight ahead as to not make eye contact.
Stage fright.
But he talked. And talked. And talked.
He was obviously nervous.

So here’s the deal.
North Point has a conference every year teaching other people how to do church like they do.
All Souls probably does not.
But both are changing lives of people in their community by showing them Jesus.
Just in drastically different ways.

So as you are planning your church plant, or church schematics for next year, after you drop coin on the conferences that bury you in swag and sessions, head over to the version of Sunday that looks completely different than you desire to emulate.

You may just end up looking a bit different than you originally thought.
Los