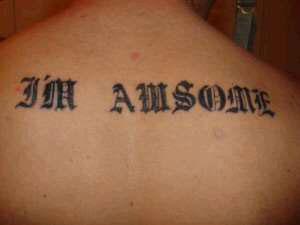 [one letter makes all the difference]

I try not to do it.
Try.
But let’s be honest. It feels amazing.
Yet it’s kinda like making out with a hot girl in public, yet the only problem is that everyone else sees that she’s actually your ugly cousin.
But you are blind to it
Retweeting it when someone tells you how awesome you are.
There are a few agendas here.
Let’s look at the pure ones…
1. Person tweeting about you actually thinks you are awesome and you did something that has had major impact on them.
2. You retweet because you want people to know that God is using you and your ministry.
Now let’s look at the ugly cousin ones.
1. Person tweets something awesome about you because they hope you find some vanity in it and retweet it so they up their followers…
2. You bite the bait and let people know that person x thinks you are the cats pajamas. You end the retweet with your own”I think you are awesome too!!!” which completes the public cousin makeout session full circle.

Now I like to look at pure motives.
When I have done this, and I have, I am probably batting .500 when it comes to not trying to be a DB. And the times I have wanted you to know how absolutely awesome I am is probably because someone has just ripped me a new hole and I’m pissed and wanting to feel better about myself.

Now here is the other side of the coin. When you  ASSuME the worst of someone and you start making out with yourself.
Only in private.
And that is probably worse because things can go a lot farther in private.

Twitter and social media is a strange thing. It is soooooo about mememememe yet it actually helps other people.
It’s a strange world.
You share your pics on instagram and hope for 15 likes.
Yet when someone retweets some praise you act like they committed a deadly sin.

So here’s the deal.
I like to approach twitter like a conversation going on at Phillips Arena.
There are 20,000 people watching me and I’m probably not going to walk on stage and say…
“He guys!!! Thank for listening to what I have to say today. First off…Did you hear @awesomedude tell his friends I’m awesome? You know what? He is awesome too.”

That feels a bit sketchy. But it’s almost as we are on stage with a blindfold on and earplugs in.
The noise of the crowd is shut out so it feels ok to say because they are not really there.