There’s a few people unfollowing everyone who follows them on twitter right now.
They each have their reasons.
Chris Brogan started this trend last week.

Here is my system.
I have 2 twitter accounts.
One I use to communicate with my social media amigos and one I use to simply just read a list of about 70 people whom I “really” follow.
If you look at my HooteSuite screen I have 4 columns. 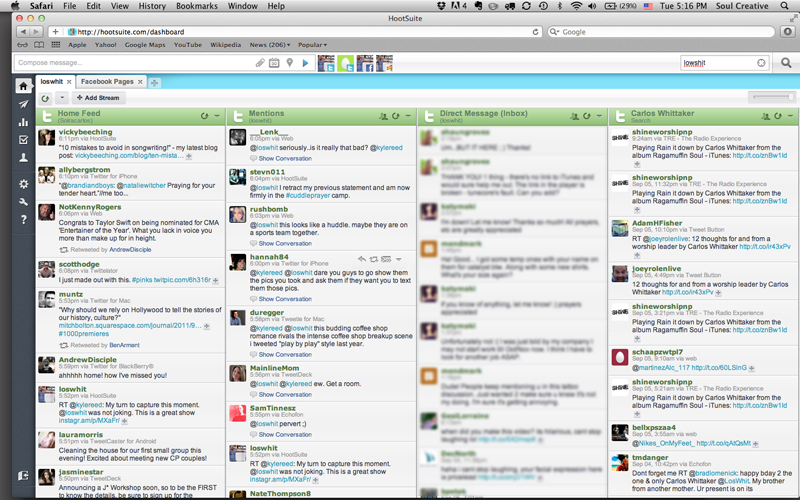 The far left one is my “secret” account.
It’s not really secret. It is just not interesting for you.
Cause I don’t tweet from it.
I just only use it to follow people I actually know.
I don’t tweet from it. I don’t reply from it. I don’t DM from it. I just read it.
The next two are my @replies to my main @loswhit account and my DM’s to my main @loswhit account.
As you can see I don’t have a stream setup that actually reads 12k tweets in my main @loswhit timeline.
That would be insane and stupid.
So I use my @loswhit account to talk with you in real time.
The last column is a search column that I use to see who’s talking @$# about me and send my cousin Joey to beat them up.
It’s that simple.

Now my reasons for following everyone who asks me to follow them.
1. It speeds up communication.
When someone asks me how to get a hold of me, I say tweet me.
This turns 4 page emails into 140 character emails.
This turns 2 minute voicemails into 140 character voicemails.
It allows me to be connected to my tribe while not drowning in emails and voicemails.
The amount of time I spend answering emails has literally been cut 75%
2. It let’s me hang out with 22k people at a time.
I I don’t use an “autofollow” script.
This is why you are following porn.
This is why you get so much spam.
If somone asks me to follow them back so they can DM me, I do.
It’s simple.
Following real people will result in real conversations.
And when they do decide to accidentally type their credentials into a hacked site, and when I do get their spam messages, I let them know personally and they see me as even more a human than they did before.
3. Twitter is the new Google.
Gone are the days where I use Google to find where to go eat in a new city.
I now just tweet at you and you tweet back at me or DM me some of the most delicious plates in your cities.
You tell me what the best homeschool math program is.
You tell me when I mispell something on my blog.
You DM me about how offended you are when I post pictures of beer.
4. Did I mention it allows me to see who the up and coming social media ninjas are?
I’m not fooling myself into believing that I am the one with all the important stuff to say.
There are THOUSANDS of you who are coming up with WAY better crap than I am. And I get to see it all.
If you are interested enough to read what I have to spit, than I want to know who I am influencing, so I can in turn, be influenced.

So there you have it.
What do you think of my strategy?
What is your twitter strategy when it comes to how and why you use it?
Los