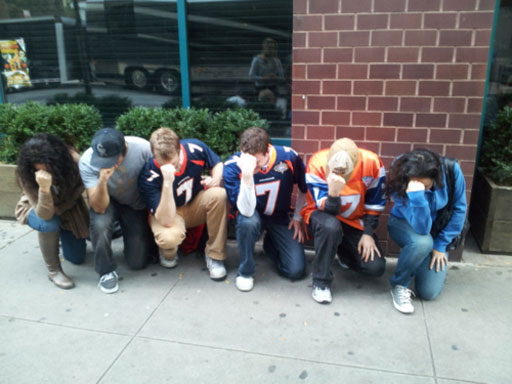 Tim Tebow makes no apologies about it.
He is a believer of Jesus Christ and even has his own patented prayer move.
He makes a lot of Christians happy.
He makes a lot of Christians nervous.
I’ll admit, I have said a few times things like…
“Take it down a notch Tebow.”
My friends and I sometimes watch what he does through our fingers, as if watching a scary movie.
He sings Lord I Lift Your Name On High on national television.
He gets mocked on SNL for pulling the God card in every single thing he says.

He prays to God to win a football game, as if somehow God cares about the outcome of the game.
[stepping back from lightening bolt you real football fans think is about to strike] Kurt Warner, the former highest level offender, even took opportunity to tell Tebow to turn it down a notch…

Then yesterday happened.
I was suddenly proud of Tebow.
I was like… “Look at that great Christian role model! I’m a fan!”

What is your take on athletes/celebrities and their God talk?
Are actions louder than words?
Or can words be enough since we truly never see the lives behind the words anyways?
Los