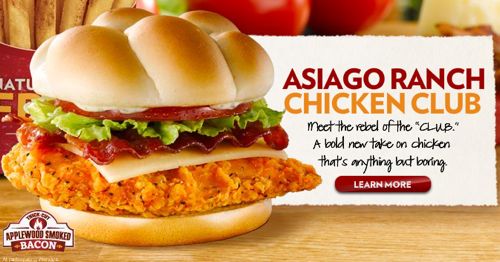 I was at the airport the other day and running late for my flight.
I swung by Wendy’s to shorten the duration of my life by one day in order to grab a Asiago Chicken Sandwich Combo.
I waited patiently.
I could see from my position that my plane was almost done boarding.
So I walked up to the counter and asked how much longer.
Brother with his Wendy’s hat cocked sideways looked at me and shrugged his shoulders.
Ugh.
By the time the last person had boarded the plane Wendy had finished killing the chicken and cooking it for me.
“Order 87!”
That was me.
Thank God.
“Hey man. Could I get lots of ketchup?”
To this request he looked at me and while maintaining eye contact the entire time, grabbed ONE packet of ketchup and placed it in my bag.
“Hey man. I said a lot. Could I get some more?”
To which he gave me one more packet.
“OK. Sorry. I guess I’m not being clear. Like give me 7 packs. I like to drink the stuff.”
“Sorry man. I ain’t allowed to” and he turned around to fill someone else’s order.
“EXCUSE ME? EXCUSE ME? Are you seriously telling me you won’t give me anymore ketchup? Stop what you are doing…And grab me another packet of ketchup now. It’s not that difficult.”
After this the lady in line behind me spoke up…
“He can have my ketchup buddy. You think you can understand that? Can you GIVE. HIM. MY. KETCHUP?”

At this moment the hardness on the face of the man with the crooked Wendy’s cap went away.
He grabbed a handful of ketchup and placed it in my bag.
He then kinda put his face in his hands for what had to be a nanosecond but I saw it long enough.

A plethora of emotions and thoughts flew through my head.
1. This guy looked like he was in his 30’s. He had been through a lot. He was close to my age plus or minus 2 years and probably had some kids around.
2. I was getting on a plane with my laptop and iPhone and Asiago Chicken Combo. He was filling someone else’s soda.
3. I was actually offended that the woman behind me spoke to him so rudely. Who does she think she is?
4. I realized that he was probably more offended by me than by her.
5. When he placed his face in his hands it was with a look of exhaustion filled with determination.

The small moments of our lives are the things that make up the big moments.
We may feel like we exist to create big moments for ourselves, our family, and the people we interact with, but that is actually such a small part of our existence.
We exist in a way that places most of our significance on small moments.
And my small moment ruined that guys big moment of a day.

So this week, while you are pumping your gas, walking out the door to work, making that routine business call, or asking for more ketchup…
Make your small moment someones BIG moment.
It’s better that way.
Los