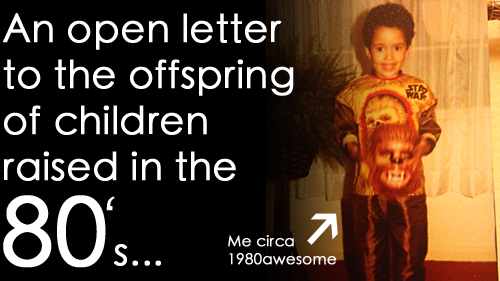 Hey kids.
There are things that you are missing in childhood that I thought we, your parents raised in the 80’s and early 90’s need share with you.
It’s not that you aren’t having a fantastic life, but it’s just not as fantastic as it was in the 80’s.
It’s a bit scarier and dirtier, but it’s still a beautiful place to live.
You marvel at the concept of having to wake up early on a Saturday morning to watch a certain cartoon.
So listen…

1.  When I was 6 I started riding my bike to school down Sprucewood Dr., through the cul-de-sac, down Angie Maddox’s driveway, past her mom’s garden, across the creek (hoping it was raining so I could act like the Duke Boys), and onto the playground at Rehoboth Elementary School.

We will barely let you to the end of the driveway without checking on you every 5 seconds.

I know that sucks but our parents didn’t watch Criminal Minds like we do. So we are screwed.  And this is where life on a farm becomes the goal…

2.  On road trips we had no iPhones and iPads and our gameboys would only last about 2 hours with 4 AA batteries. So we would get on my dad’s CB radio and talk to the truckers on the highway.
They were always so crude until they heard a child’s voice on the radio.  Then they would tell us stories of life on the road.
I remember how a child’s voice would calm a giant.
It was awesome.

3.  Upstairs in the attic I have a box of Love Letters from girls I was in “Love” with.  It would take about a week for my letter to get to them and a week to hear back.

The power of PAUSE is something that we have lost and it brings such strong emotion when you let it in.
It used to be forced yet now must be invited.
Make that guy or girl write you letters.
It takes time, patience, and devotion and it is worth every walk to the mailbox.

4.  My first camera was called The Kodak Disc.  I was able to take 15 pictures before I had to buy another disc to take 15 more pictures.  Every shot was worth something.

You are growing up in a world where you take 100 shots and pick the best one.
I dare you to wait until it’s right to click the button.

5.  When I was growing up I had to chase sin a lot more than it chased me.
My friend Brian and I would have to sneak into his dad’s closet and open the shoebox on the top shelf then sprint out to the backyard and into the treehouse in order to see the girls in bikinis on the motorcycles and ooooh and aaaaah.

I can’t take you into Toy’s R Us without realizing that more than half the dolls are dressed like strippers and one wrong click on the internet will expose your eyes to things not meant for anyone to see.

I can’t imagine when you become teens what you will have to handle.
But I do know this.
I can’t raise you inside a locked castle.
The world is a beautiful place.

So instead of locking you up and throwing away the key we are going to do something else.
We are going to keep teaching you to fix your eyes on Hope and Truth so that when you do click that link, you won’t have to make that decision alone.

God is not scared of 2012 and neither should we be.
Now shut that iPad off and go build a treehouse then maybe I’ll let you watch The Great Space Coaster.

It’s better that way.
Me