There once was a boy named IMAGINE. He lived in a city called EXIST. 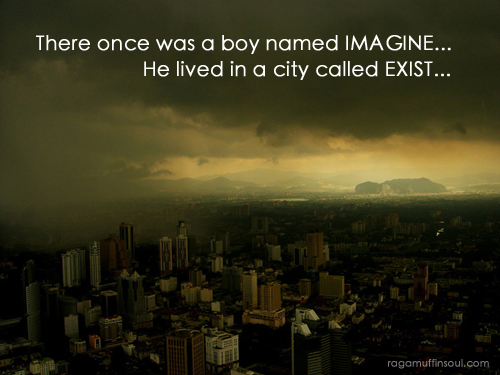 There once was a boy named IMAGINE.
He lived in a city called EXIST.
It was an amazing city.
Full of playful wonder, bright colors, surrounded majestic mountains and bright blue skies.
IMAGINE loved it.
His parents were loving and kind.
They poured into IMAGINE hopes and dreams and gave him toys and books that set his heart on fire.
So IMAGINE grew up only knowing one thing…
That anything he dreamt up, he could do.
All through childhood IMAGINE flourished.
His dreams were bigger than the tallest buildings in EXIST.
He couldn’t wait to grow up so that he could be like his mom and dad and have the time of his life in EXIST.

IMAGINE was not ok with this answer.
So he set out to find out why.

IMAGINE found his way to the library in downtown EXIST.
He scurried through all the old papers and history of EXIST.
Then he saw it.
The paper was dated about 60 years ago when the city of EXIST was founded.
He couldn’t believe his eyes.
The town was originally named THRIVE!!!
What happened to everybody?
What had happened to this city?
The more he dug, the more he uncovered.

THRIVE was founded by people who were looking for an adventurous life. A life filled with hope and dreams. They found this plot of land and began to dream about what it could be. And for years they turned it into that.
A place of wonder, fun, and chasing dreams.
And they wanted to expand the city’s borders so that all the world could one day feel the hope of THRIVE.

After a while, THRIVE began to work.
The community began to settle into patterns and systems that they knew would not fail them.
They began to find safety in these strategies and systems.
This is when THRIVE stopped…thriving.

IMAGINE stood up, looked up, and then ran home…

“Mom! Dad! Why didn’t you tell me that EXIST used to be called THRIVE? I’m getting numb and the color is leaving my sight! This can’t be what you wanted!”

IMAGINE’s dad responded…
“IMAGINE, it’s better this way. After we founded THRIVE, people were beginning to get hurt. People were getting lost as they looked to expand the city. THRIVE was a bit too risky. So the council of THRIVE made a decision.
No more THRIVING. It was too dangerous. We were much safer just existing. So… we changed the name, and everything became much safer.”

IMAGINE looked his dad straight in the eye…
“Dad. What’s your first name?” he asked.
“HOPE. Son. My real name is HOPE.”

“Well then dad”, IMAGINE replied, “It’s time for you to feel what your name means again.”

On the sprint to city hall HOPE felt something brush against his face.
“What was that son?!!” he asked IMAGINE.
“That was wind dad. That was the wind against your face. You are feeling again dad! Let’s go!” IMAGINE shouted.

When they got to the steps of city hall Mayor SAFE was just about to push the safe button and address the city of EXIST.
But before he could, HOPE ran up the stairs and grabbed the button, lifted it above his head and looked right into IMAGINE’s eyes.
He stepped in front of the microphone and said…

“Citizens of EXIST. I remembered today something we have all forgotten. My son IMAGINE reminded me why we started this city in the first place. It was to have a dangerous life of radical adventure. To THRIVE and show the world what life could really look like. Somewhere along the way we got comfortable. We felt safe inside of THRIVE and we chose EXISTING instead of THRIVING. It’s time to THRIVE again.”

With that he took the button, raised it a bit higher, and smashed it into the ground.
In an instant the grey night cleared and people saw stars for the first time in decades.
Numbness fell off of every adult in EXIST and even Mayor SAFE had a dangerous look in his eyes again.

A buzz began to fill the city streets and slowly turned into a loud and messy roar filled with hope and freedom.

On the walk home IMAGINE looked at his dad HOPE and smiled.
It wasn’t just the children laughing anymore, parents were outside with their kids laughing and dreaming and planning once again to show the world the hope they can have.

It was once again a DANGEROUS and THRIVING city.
People suddenly turned their eyes back towards the outer city limits and away from the city center so they could  tell the world around them the message HOPE had given them.
Life is meant to THRIVE and not EXIST.