Why I Unfollowed Everyone On Twitter And Started Over

Exactly 365 days ago I wrote the post “Why I am Not Unfollowing Everyone On Twitter. My Twitter Strategy Explained.”
It was everything that was true to me at the moment.
It was filled with truth points about communication, lists, and such.
These were true to me at the time.
1 year ago.

Social Media years are similar to dog years.
I won’t google this but I think it’s like 1 human year is 7 dog years. Or something like that.
That sucks for the dog.
Well in Social Media I liken 1 human year to like 20 social media years.
It’s true.
This stuff moves like lightening. 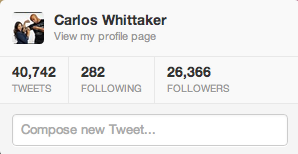 I’m going to, in this season, use twitter to follow people I know.
Imagine that.
And a few people I don’t know but wish I did 🙂

Also. I used to follow people so that they would follow me back.
Living in the spirit of Authenticity that I try my best to…That’s about as inauthentic as one could be on social media.
I didn’t really follow you.
I had a list that I actually followed.
One of the accounts that “follows me” is @freelegalhelp
NewsFlash
They aren’t really following me.

I want the people who are following me to actually care what I have to say.
The second you don’t want to hear from me anymore it’s easy…
Unfollow.

I’ve got friends of mine who have 50k and 150k people following them on twitter. And for a while I was trying to chase that goal.
Until I looked at who was following them.

I’m in a time in my life where simplicity is key.
I’ve got so much crap going on that one more list to follow is simply too much.

If you’re bummed I’m not following you anymore on twitter, I apologize.
I got bummed when I found out my dad stopped following me on twitter.
His response…

“I love you son. You just tweet too much”

Who knows? In a year… I may just decide to follow nothing but Lady Gaga fans.
What are your thoughts on the ever shifting role of social media in your life?
Los