What Being a Waffle House Cook Taught Me About Life 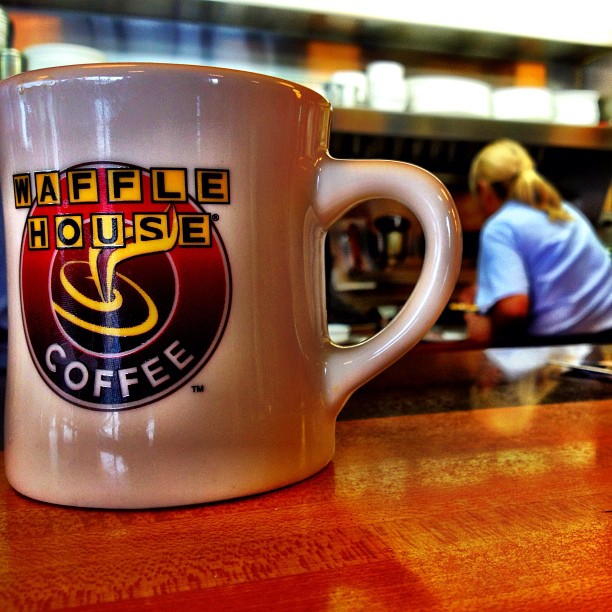 She was letting him have it.
“I didn’t say do it like that.  Why are you doing it like that?  That was will get you fired.  This way will get you 7 bucks an hour.  C’mon kid.  Pull another bacon.  If you don’t pull another bacon it will be too cold when you put it on the grill.  You said you graduated from high school?”
I kept peeking up from devouring my bacon egg and cheese plate scattered well and seeing the kid’s head dip lower and lower.

I remember my first day at Waffle House.
Summer of 96.
I got the same up and down from Peg.
It was the middle of the afternoon, the place was empty, I was on the grill, and Peg was lighting into me.
And yes.  Her name was Peg.  Not Peggy.
I confess that only 25 minutes into her tirade I snuck into the bathroom and worked up my “I Quit” speech.
When I walked out… I was about to open my mouth when peg said…”That omelet you made, the first of the 12 you made me this afternoon.  That one was delicious.  The rest were horrible.  Whatever you have to do to get to that place you were at when you made that omelet, get there”
I replied quickly…”I need you to get off my ass is what I need you to do.  I can’t handle you.”
All Peg did was smile and walk to the back.

Fast forward to yesterday…
“Can I have my break now?” the rookie asked.
“Yea.  But hurry.  You got more omelets to destroy.”

When the kid walked out and lit up his American Spirit, he was shaking his head and mumbling something to himself.
All the waitresses gathered and whispered to the cook who was lighting him up.
I overheard her say… “He’s really good.  I hope he makes it.”

You see… I know exactly what Peg #2 was doing.
Being a Waffle House cook was without a doubt, the hardest, most mind consuming job I have EVER had.
5 days after training on the grill in the afternoons from 2-4, they threw me into the fire.
6:30 am, that next Monday morning…
“Bacon egg and cheese plate on 2 like 1!”
“Waffle Up!”
“Hashbrown scattered covered smothered chunked topped and diced”
“Ham and Cheese Omelet with extra cheese on 2 like 1! Pull a Ham!”
This was the first 90 seconds.
In order to not go crazy I hummed Let It Be by The Beatles.
And I hummed all day long.
When I finished my shift Peg came up to me and whispered…
“I hum too.”
2 weeks later I was a freaking machine.
And I loved the chaos mixed with my melodies.

And here’s the deal.
Waffle House is a short order restaurant.
This means there are no tickets to read.
You literally have to pull plates and place packets of mayo in certain directions and place eggs on certain parts of the plate and lay cheese diagonally or straight according to what the order is.

6:45 am I realized what Peg was doing.
She was getting me ready.
And had she not, I would have crashed and burned…

I walked out of the Waffle House yesterday and put the kids in the car.
We had a long drive to the ATL in front of us.
Right before I sat down, I looked right and saw the kid finishing his last drag.
I walked over to him and said…”Day 2?”
“Yea man.”
“What’s your favorite song?” I asked.
He didn’t hesitate… and I won’t pretend to know what it was.  I’m in my 30’s…
“Well that.  Hum that.  And smile while you hum it.  That lady’s words will melt into the melody.  I promise”

So today, when the waves beating you down are unrelenting…
Know that it’s going to actually get harder before it gets easier.
But the farther offshore you walk, the calmer the waves become…