To be like Jesus or David Blaine? There is magic in your simplicity 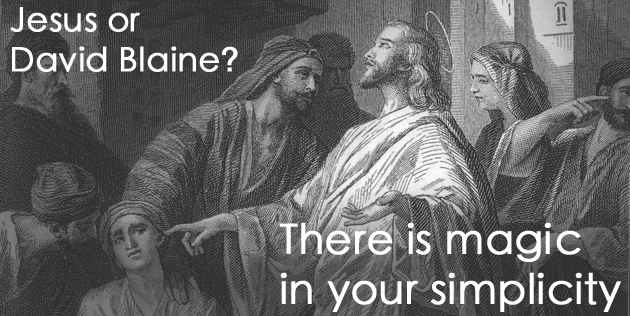 Why do we follow who we follow?
Not because they are full of woo and are dropping miracles on every corner.  You take them and trust them because they are simply living the right way.
When you look at Jesus’ ministry this was exactly where he was for the beginning of it.
With His disciples in tow, He had never even performed a miracle..  He had none so much as asked them to drop their nets and follow Him.
They were not following Him because of a grand miracle that they had seen.  No.  They were following Him because of a consistency they had seen in His life.
Looking at our own lives, in this age of everything having to be Grand and Huge, we look to have to perform some huge miracle in order to gain a tribe.
We have churches pulling stunts and giving away motorcycles in order to gain church attendance.
We have pastors trying to David Blaine their lives into being worthy of a following.
We have stay at home moms and miserable husbands trying to fabricate a false reality through instagram so that people still follow.
Jesus simply was.
His living day by day was enough to convince this group of seekers and wanderers that He was worthy of following.
Only after He had created a following with His life, with day by day consistency, did He perform His first miracle.
Don’t try and show how miraculous you are in order to gain followers.
Do what Jesus did.
Simply…
BE.