How waking up before 5am has literally changed my life and why you should try it. #40to40 #LifeHack #CountdownTo40 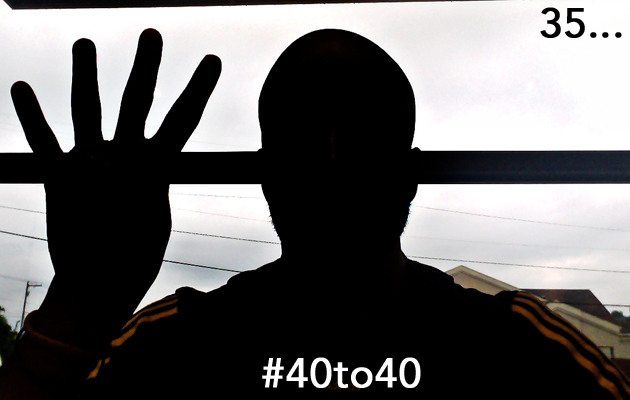 [Did you notice how I used my dome as the 0? #BrilliantIKnow]

Listen. I know this isn’t some life hacking blog.
But as I approach that beautiful number… 40… And as I see major changes in my life because of a few small decisions… I thought what better time than now to share with you what this old man has learned…
Before I’m old enough to win some lifetime achievement award.
So as Neil Patrick Harris, Seth McFarland, Tyra Banks, Mario Lopez, Pharrell Williams, Leonardo Dicaprio, Ryan Seacrest, Jimmy Fallon, and of course Steve-O all turn the big 40 in the next 12 months… Feel free to watch me handle it way better than they do. 🙂

These used to be some of the reasons I would spit out when people would ask me why I stay up so late.
Literally as of 3 months ago I used to stay up till 2am or later every night.
It was habit.
What started off as simply playing Madden in college till 2am simply became who I was.
A guy who stayed up late and hated waking up.
Little did I know what I was missing.

Here are some reasons that have helped me decide to become a morning person.

1. Most of your lazy butts are not awake yet.
Which means most of you lazy butts aren’t filing up my twitter feed with cat videos and royal baby jokes [Which I Love] yet. This way I’m not distracted and can focus on getting my junk done.

2. Working out on an empty stomach first thing in the morning has a fantastic effect on my metabolism.
I know that people argue this but I’ve found it true.
I’m not hungry at all at 4:45am so it’s not really an option to eat.
And in 2 short months of working out early, I’ve dropped almost 16lbs.
When UK researchers questioned adults about their sleep habits, they found people who stay under the covers on the weekdays until 9 AM are more likely to be stressed, overweight, and depressed than those who get up at 7 AM.
My wife likes my new pecs.

3. I’m in charge of my day and you are not.
When I used to wake up at 9:30am I already had 5 text messages and 20 emails. I was catching up ALL day long and it felt like a race. So now that I’m up and at ’em early, I’m texting you first and that small change, changes everything…

4.  My kids get more of me.
I know this may not be an option for some of you but there are ways to work the system.
Now that I’m up so early, I’m literally done with most of my “work” by 1 or 2 in the afternoon.
This means I get home while my kids are still doing school and they get way more of me than when I used to get home at dinner.
I used to feel like getting home late was some sort of badge of honor from working so hard.
That’s. Stupid.
My kids won’t remember that badge. They will simply remember me not being at dinner.
Now I know that some of you don’t have this option…
So wake up early and take your kids on morning dates. They will remember time with you in the am just as well as time in the pm.

These are just some of the reasons I’ve made the change to wake up early.
It’s not necessarily the right thing for everyone, but I lean towards the camp that says waking up early will make your life better.

Talk to me ragamuffins…
Are you an early riser or a night owl?
Los