4 Overlooked Steps To Picking Songs For Your Worship Service 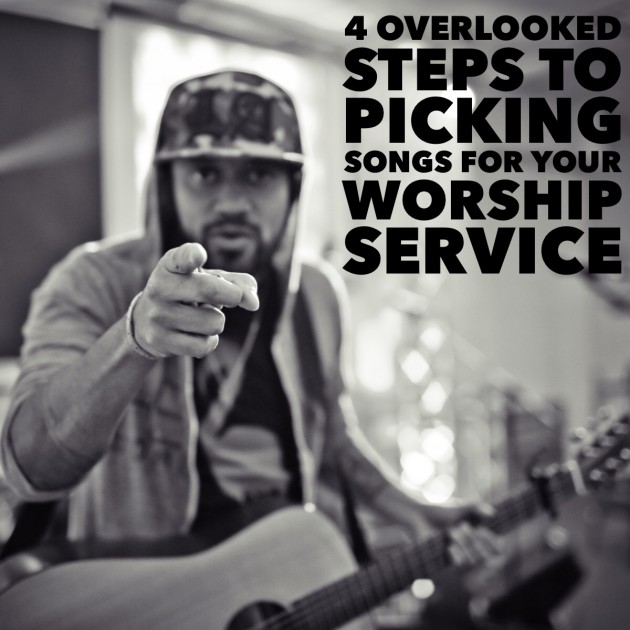 1.  Your church is not as excited about the new Bethel record, Tomlin song, or emo hippie house church song as you are.

Remember… It’s not a stretch to say that over half the people that walk into your Sunday morning services have little to zero interest in the music portion of the service.  I know I know.  You are going to change their hearts and they will soon sprint onto the arms of the savior while weeping at the bridge of Relentless.

ASK people.  And by people I don’t mean the worship band. We listen to songs differently than the normal church attender does.  Find those people who look like they hate you during the worship set.  Ask them.

Tagging off the previous nugget.  I think sometimes we FORCE amazing songs on our people and the song fails because we went WAY too fast with it.

If you have a tendency to want to make out on the first date, keep it to your love life, not your song selection.  Oceans is a great example.  Our church introduced the bridge to that song mixed in with other choruses.  We took it slowly.  I know some friends that, although eventually catching on, that song was almost lost because they did it TOO MUCH TOO FAST.  Slow your creep y’all.

3.  Shout To The Lord In A Secret In A Quiet Place While You Open The Eyes Of Your Heart…

Listen, I get it.  I KNOW you led those songs 23431244321 times in 1996. But I tell you what. Those were some GREAT songs.  And such greatness does not deserve to be sitting in some worship binder in your bedroom.  Get that junk on planning center.  Pull out some of these older worship songs and watch the decimal reading in your room go through the roof.

Reward your congregation for all the techno worship you have been throwing them with some tried and true classics every other week.

4.  When you are sick of the new song, they will just be getting into it.

I know lots of churches who will do a new song for 3 weeks, take a week off, sing it again, and then put it in the rotation.

I’m not sure who came up with this algorithm, but I’d like to offer a different solution.

I would say include the song for 7 weeks in a row.

Sure, if you do the whole thing every Sunday.  Going back to nugget numero dos.

Why in the world?

1 being that most people only attend church 1 maybe 2 Sundays a month.  These people are not going to be sick of the song.

And what about the people that come every week?

They sing that song 1 time in 7 days.

You?  You rehearse it on Wednesday night. Rehearse it Sunday morning.  Run though it again with full production.  Sing it 3 services in a row. Of course it is going to be too much for you to handle.

Good thing it’s not about you…

I hope these helped you guys out in some respect.  Leading worship the past 15 years has taught me anything, it’s to continue to disturb and disrupt my process.

Shake it up baby…